Well... I wont lie to you all, its rather warm here in the Uk at the moment. Rather then roast indoors blogging infront of a computer,I've been very happy out basking in the sun, sipping a glass or two, and of course eating (a ploughmans tastes even nicer this time of year)

So please forgive my lack of posts (I promise to finnish off the many in drafts especially Skegness Blue)   ....but I'd rather be making the most  of this rare weather....I think you'll understand :)

I'm really looking forward to the next 4 weeks .With trips to the Big Cheese Festival in Wales ,Cornish food festival in ermmm.. Cornwall England ,then for a spot of R&R in the Dordogne region of  France. I'm going to have plenty to talk about after those little trips  ..........and feed my belly.

I hope you are all loving  the weather while it lasts ....and offcourse enjoying  a cheese or three.

Posted by Stiltonmuncher at 01:45 No comments:


Now off we go to the great university city of Oxford, and track down a cheese that shares its name, but in true Somerset cheddar style, its made no were near the area.

Oxford Blue Cheese is a surprising taste of Europe found in the heart of England's green and pleasant land.With a name as English as Worcestershire Sauce and Yorkshire pudding but with the unmistakeable continental  twang of Roquefort, Gorgonzola or Saint Agur.

Oxford blue is a soft punchy cheese ,made from pasteurised cows milk and vegetarian rennet. It is sold in its usual 400g foil wrapped rounds, and can even be found in small cylinders called "Baby blue".

This cheese has a geographical chequered history .It was first made in Buckinghamshire before moving to Harington in Derbyshire until 2009. Now it is back with the Oxford cheese company in Worminghall Buckinghamshire.

It is deliciously tangy and salty and packs a punch just like any continental heavyweight. With its soft creamy texture, it is in my view one of the best blue cheeses made and found in the UK.With this in mind this cheese definitely gets a 4 out of 5.

Its also Certainly worth a mention that the same company also make Oxford Isis (washed in Oxfordshire Honey Mead) and College White (a strong brie style cheese) and if there blue has anything to go by, they be definitely featured in future posts.

But for now we move on ....to Lincolnshire to try a blue, then  to try a French style goats cheese made in Somerset.

To much tasting = less writing

Mouldy Old Cheese (@MouldyOldCheese) tweeted at 2:44 PM on Thu, Jun 20, 2013: June is the most busy but rewarding month. Blog is suffering from too much tasting and not enough writing ....so many in the draft stage :) (https://twitter.com/MouldyOldCheese/status/347711448065134593) Get the official Twitter app at https://twitter.com/download
Posted by Stiltonmuncher at 14:48 No comments:


So my dear traveller, we have dipped our toe into into the great sea that is Wales, and we will look forward to going back in future months,but just for now let us spring across the border through the Royal Forest Of Dean until we arrive at the rugby loving County of Gloucestershire.We find ourselves in this Ancient Roman garrison, where not one but two matured curds share its name.

Ask anyone what cheese comes to mind when you mention Gloucester then of course hands will go up and cries of Double Gloucester fill the air.  There is another .......the quieter twin brother, so to speak, the Gloucester cheese that doesn't seem to have the pomp and circumstance of its bigger louder mass-marketed  twin.........may I introduce you please, to the quieter but packed with flavour ...... Single Gloucester

First mentioned back as early as 1792, Single Gloucester is by far the oldest of the two so here I think is a superb place to start.

Single Gloucester cheese is only produced by a  few dairy farms where the breed of Gloucester cow is still maintained. Smarts, Charles Martell &Sons, Godsells Cheese and Wick Court Cheese are the only dairys registered under the P.D.O (UK Protected to make Single Gloucester) I have been fortunate to try samples of all ...and in my opinion Smarts was the front runner (at the time of testing) so for this reason and for the benefits of this post, I'm going to give my opinions on this dairy's cheese

This cheese is made from full cream milk, fresh from the morning milking,and skimmed milk from the evening milking. All the milk for this cheese is unpasteurised, and is produced in Gloucestershire, which must include milk from Gloucester cows maintained within the County. Smarts Single Gloucester is a full fat hard cheese made using vegetable rennet and is traditionally made  in a flat circular disc shape with a light white/grey mould or rind cleaned (if vacuum packed)

The production of Single Gloucester did die off in 1938, due to the outbreak of World War Two and the increase increase in liquid milk, but thankfully it was reintroduced  by a few Gloucestershire farms back in 1978

To call this cheese cheddar-like, would be offending it greatly.  The people of Gloucester should be proud of this great cheese.  Yes, it's curd has a look, flavour and texture of a true medium cheddar but it has it's own warming sunset yellow glow moving lighter the more central you get into the cheese.  The smell again intoxicates the nasal  passages with a sweet burst of aromas.  As I've already mentioned, the texture is that of a medium cheddar but without question, it is far smoother and creamier then it's true Somerset cousin.

Now there's a added bonus to the Single Gloucester ...and I apologise unreservedly for not mentioning this before.  Now this cheese from the foothills of the Cotswold's is 58% fat in dry matter and a further feature of this cheese is that it can be low in fat, at the discretion of the cheese maker...  So if you're looking for a cheese lower in fat or want to change from a full fat cheddar and don't want to lose the flavour, then you won't go far wrong in using a Single Gloucester cheese.  I truly recommend if you can, to speak to the dairy (or at least the person behind the deli counter) to find out how much fat is in the cheese, as this is always indicated on the label.

To sum it up, yes I love Single Gloucester, I love the way it produces character and flavour in a unique single cheese ...and how it has shied away from over advertising from the self-praising advertising gurus.  For this I give this cheese a whopping 4 out of 5 and I recommend anyone to give this cheese a try.

Posted by Stiltonmuncher at 07:13 No comments:

Ewe only live once


On my travels yesterday, I came across this fabulous sight. 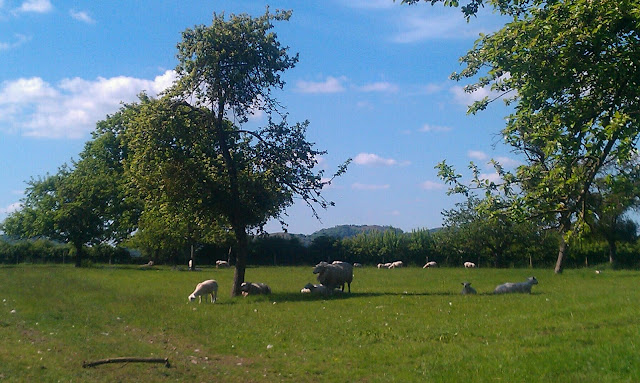 This picture of pure tranquil harmony, is repeated in every country, and continent throughout the world.  From Namibia to New Zealand and Argentina to Andorra (give or take the odd sand or snow isolated baron desert).

We must consider ourselves lucky and fortunate, as ewes milk is used to create many a masterpiece by the cheesemaker to tantalize our senses and send us into rapturous cheesy whiffy delight.  I hope in the weeks, months and years to come I can try, savour, write and promote many such cheeses (and as many hidden gems) as I can.

If you have a particular favourite, or there's a cheese you're considering but not to sure about then please let me know and  I will try and feature it in future postings.
Until then my fellow cheesemunching travellers - onwards because we haven't even scratched the surface yet!!!

Posted by Stiltonmuncher at 12:09 No comments:

In 1232 the population of Denmark used cheese, as a form of currency to pay their taxes to the King and Church.

Email ThisBlogThis!Share to TwitterShare to FacebookShare to Pinterest
Location: Denmark

So off we go again......this time let's head off to Italy.  To be more precise, lets head up to the Northern region of Lombardy, we sweep through the breathtaking valleys until we get to the valley of Val Teleggio then we come across the little treasure of Taleggio.

Taleggio is a semi soft cheese made from cows milk (pasteurised) has a light orange crust and is ,made in a distinctive square.  Traditionally this cheese is matured in caves which in turn helps the moulds grow around the rind and gives Taleggio its unique whiff - sorry aroma!!  Without question it makes a huge difference to the flavour.

I grant you there is a little whiff about this cheese.  Not a strong odour by any means of the imagination, but a tangy  whiff of surprise.  That light smell pervades the senses and tantalises the taste buds.  The texture is definitely that of great delight. With one small bite it slides down the sides of your tongue caressing every taste bud and gives them a cheeky little wink and a nudge as they pass by.  I must say this style of soft rind cheese can be hit and miss at times but Taleggio really is one of its flag bearers.  In my humble opinion, this cheese is proud of what it is and needs no media hype as this cheese can really stand up for itself.  I would go as far to say if you have this as the only soft rind on your cheese board  then I doff my hat to you as you've made an excellent choice!

On my cheese scale, I have to give this cheese a whopping 4!

Stiltonmuncher
Having spent over 25 years as a chef, I have always enjoyed a savoury palate - There are so many textures, flavours colours and smells that have tantalised my taste buds and have excited my eyes. But if you were to force me into submission and extract out of me what is my food of choice, then without question it has to be…. Cheese. Throughout my life I’ve enjoyed travelling and trying new foods (especially that of the matured curd). So if you’d like to..? Then your very welcome to hitch a ride as I journey around and record all my thoughts and opinions on the cheeses I've discovered, and maybe convert some people as we embark around the sometimes mouldy and a little whiffy… ‘Great Kingdom Of Fromage’...